The Travelers Were Traveling

I can't complain a bit about the day at Afton Station.   The sun was shining and the travelers were traveling.  I'm not loaded with time to devote to this post tonight, but I'll try to summarize.   When we (Ron M. and I) drove up to the Station a half hour early, there was a guy in bicycle gear looking in the window.  It turns out he's from Mechanicsville, VA and he's part of a group of 18 riders who are pedaling across Route 66 from Chicago to Albuquerque as members of a non-profit group called Adventure Bicycle Club.  They aren't going for speed; they only go 50 to 65 miles a day, but that's quite a feat indeed.  None of the other cyclers stopped at the Station, but we were certainly  honored by the visit from the one who did. 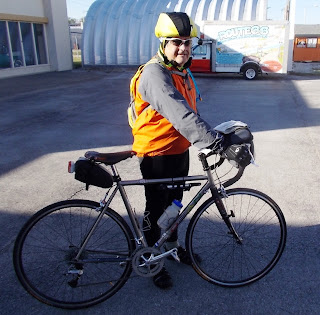 Shortly thereafter, this happy group from Atlanta, GA arrrived.  We had a discussion about remembering names after first meetings (I'm just terrible at that!) so I vowed I'd remember the names of these three. Left to right:  TJ, Signe, Rick.  There!  I think I did it!   These folks also brought happiness to our day as they moved across Route 66 to Amarillo. 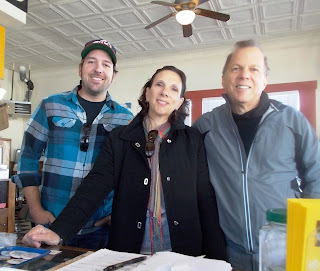 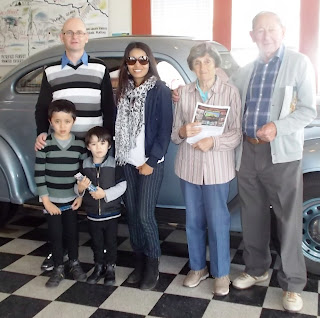 Our friends Brad and LaSandra Nickson dropped in with their friend, photographer Natalie Green, all from Tulsa.  They were on a "site finding" mission, in preparation for Natalie's photography class taking a Route 66 photo-taking tour.  Last year, when they took a Route 66 photo tour west of Tulsa, the result was an incredible show which I attended. (See this blog post for Feb. 26, 2012).  They will be coming next Saturday to photograph Afton Station and I can't wait to see the photos produced by this group. 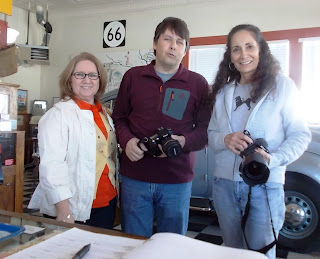 There were other visitors too, of course.  They came from Wewoka OK, Dallas TX, Grove OK, Wichita KS and Afton.

I'll probably be away from blogging for all of next week, as I won't be able to be in Afton for the week.  You may see a word from me here and there, but don't expect any Afton Station news until I return.  THANKS TO MY WONDERFUL VOLUNTEERS, WE WILL BE OPEN EVERY DAY, HOWEVER!
Posted by Laurel at 5:38 PM

Glad to hear that things picked up a bit compared to lately!

Enjoy your week off!