I'm calling this Iowa Day because more than half of our visitors came from Iowa.  There was the couple from Clear Lake, who told me that it's the place where Buddy Holly played  his last concert before boarding the plane that crashed and killed him.  There were two couples, traveling together from Ottumwa, Iowa, who came in toward the end of the day.  And there was the couple from DesMoines, Iowa who arrived in this great '65 Corvair, one of many they own.  They were on their way to Edmond, OK for a Corvair gathering, but they are also on their honeymoon, having been married just 6 days ago.  It seemed to me that this was a marriage made in heaven, as both are completely involved in Corvairs and other car matters. 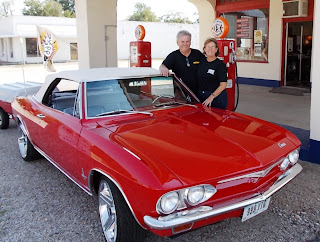 And look at this!  The new bride has a business which creates these beautiful presentations for vintage car owners who want to show off their collections on their walls or in front of their cars at car shows.  Antique car owners, check it out at www.classiccarshowphotography.com.   It's a great idea, and they definitely do excellent, very professional work. 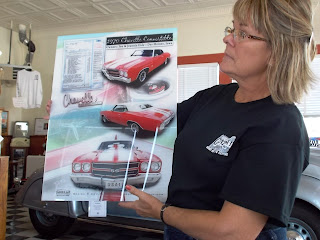 We also had visitors from Vincennes, Indiana who own, but weren't driving, a '55 Chevy and matching teardrop trailer which he built himself.  They hope to take the rig across Route 66 soon. 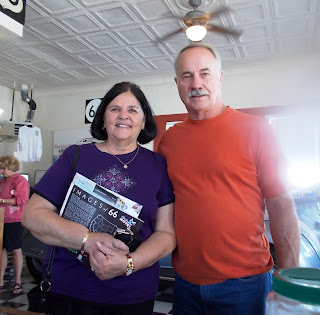 Domestic visitors also came from McLoud, OK and Dexter MI.   And on top of all that, we had Route 66 travelers from three other countries, Purmerend Netherlands, Chillawag British Columbia, and this fellow from Huidslon, Denmark.   He is taking a partial "practice" road trip this week while at a seminar in Oklahoma City dealing with agriculture in the age of technology.  However, next summer he will be the chase vehicle for his friend who will be riding a bicycle across the U.S.A. with a group that hopes to get from coast to coast in 10 days.  Impressive! 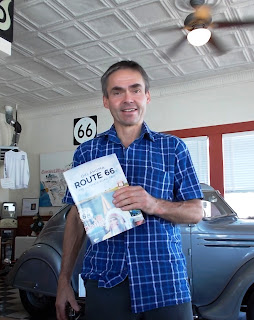 Ron M. was with me today, and Betty, Phil, Marly, and David all dropped in briefly.

Cool Corvair! I wish GM would resurrect that car.
My Grandparents had a nice Corvair back in the early '70's. Unfortunately, they sold it to my cousin who wrecked it. :(