We have our share of town folk who stop at Afton Station, many on a daily basis.  Some of them are outpatients at the mental health facility behind the Station.   We have "Sticker Man" who comes in every day to buy one sticker.  We have "Arm and Hammer", the name we gave to a colorfully-dressed couple that never walk without his arm in a loving hammerlock around her neck as if he's afraid she'll blow away.  We also have the "Old Man", a delightful gentleman who comes in daily to look at what he calls "his" car, the green '55 Packard convertible.  Wishful thinking at its best.  He's a Navy veteran who's been all over the world with great stories to tell.  Here he is, imparting some of his knowledge to one of our visitors from Finland. 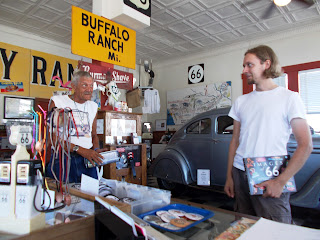 The visitors from Finland are this very attractive couple from Mikkeli, Finland who are enjoying a Route 66 honeymoon, having been married just two weeks. 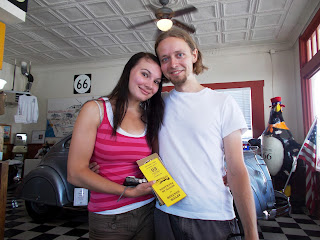 These four folks from Cannes, France, all decked out in Gary Turner's Gay Parita t-shirts, came on their motorcycles. 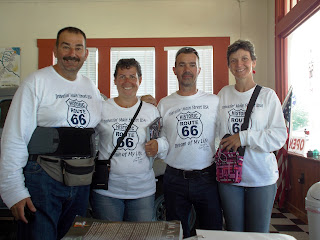 Only yesterday, Phil greeted and photographed another French foursome who had also just visited Gary Turner at his Missouri Sinclair station.   It's unanimous... everyone adores Gary, and they should.  He's one of the premier ambassadors of Route 66. 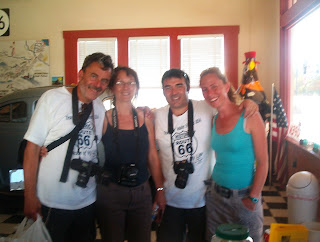 Yesterday, Phil and Robin had a very good day at the Station.   Besides the French quartet above, their visitors hailed from England, France, Texas, California, Louisiana, Ohio, Florida, N. Carolina, Arizona, and Oklahoma!   Phil also took this very attractive photo of Robin, hard at work at my messy desk. 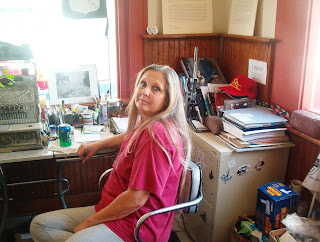 Hey Laurel, we had a nice time in Bartlesville. Thanks for the tiolet paper. LOL
Jodie & Jim from Nixa