Ok, they're not floating above Route 66! But they are a pair of really cool earrings fashioned by Robin, who is creating quite a nice collection of jewelry made out of the pressed pennies from our machine. The "floating earring" image occurred when I was careless about posing them on the cover of the new "Route 66 Sightings" book by Jim Ross, Shellee Graham, and Jerry McClanahan. So hey, it becomes an advertisement for both the earrings AND the book! (Earrings are $5 at the Station.) 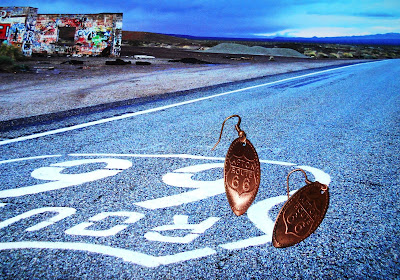 Today was actually much better than I had expected it would be at Afton Station. Cold rain fell for most of the day, and although the first hour afforded a bit of sunshine, it quickly turned to gray gloom for the rest of the day. Nevertheless, we had 7 visitors, all from Oklahoma. They came from Chelsea, Tahlequah, and Bernice. Below are the Sikorskis from Bernice. Kathi is active around Grand Lake, and her website, www.GrandLakeAreaInfo.com is a great clearinghouse for events and attractions in the area, both on and off Route 66. Besides being a great ambassador for the Lake area, she also has a sign and graphic design business. And if that's not enough, she and her husband also own and run Grand Country Lakeside RV Park. I'll be receiving more information about this later, but you can see their site at www.grandlakewest.com. 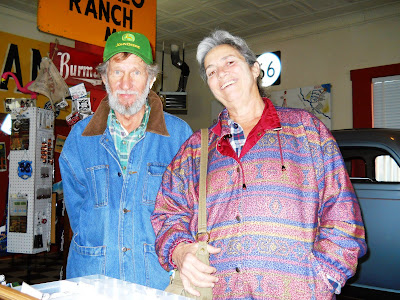 Speaking of signs, both Marly and Robin have been working on a big, almost-billboard-size sign, one of three that will eventually be erected on Route 66 both north and south of Afton Station. They're doing a great job, but work has been delayed while another project (the fixing of one of David's trailers) has usurped the sign-making space in the work room. However, by the time spring arrives, the signs should be ready to be unveiled. Meanwhile, here's a preview of the partially finished sign. 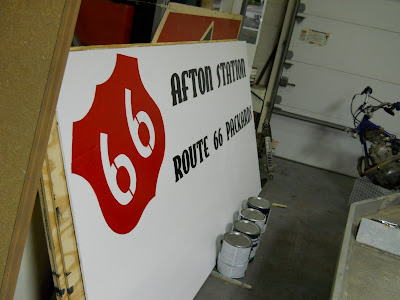 I'll be in Afton again tomorrow, barring any surprise snow storms. See you then!
Posted by Laurel at 5:28 PM

we (Erv and kathi Sikorski) had a very nice visit at Afton station...I want to refer back to your small business Saturday postings...I am not a big store shopper...I like the small shops where we can stop in and feel like we're actually welcome...novel idea!!! combining a little chatting with a little browsing and possibly some purchases makes for a pleasant outing for us.
kathi