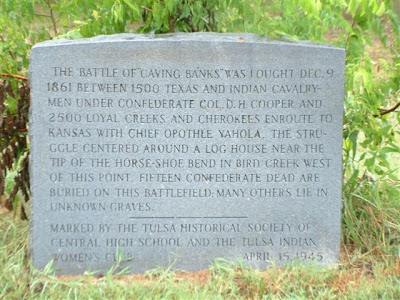 When I first moved to Tulsa, it seemed like such a big town. There were so many nooks and crannies to explore, and so many roads to drive. But after a year or two, I started to feel the city limits closing in. Now, six years later, I've been down every road in the city, and many of them I believe I could drive blindfolded.

Or so I thought. Just a couple of hours ago, my friend Denny Gibson from Ohio emailed to wish me a Happy Anniversary. Anniversary? But of course! Doesn't everyone know that today is the 150th anniversary of the Civil War Battle of Chusto-Talasah, also known as the Battle of Caving Banks? Huh? Never heard of it myself. So, I wondered: Who? What? Where? When? Why?

Lets start with Where: The battle was fought right here in Tulsa County.

Who? Creek and Seminole Indians for the Union vs the Confederate States Indian Department. What? An all-out battle, from what I can tell, engaging over four thousand troops. Why? Like the rest of the nation, Indian Territory was divided during the Civil War.

Where? On the very north end of Tulsa County, a place which (for the purposes of this blog) will be referred to as "the boonies".

My father was a dyed-in-the-wool Civil War afficionado, and yet I doubt he ever heard of this battle. And frankly, I still don't have an entirely good handle on exactly how the battle was waged. And yet, of the Confederate troops, 15 were killed and 37 wounded. The Union had 500 men killed or wounded. Those numbers are not to be ignored, particularly on the 150th anniversary of the bloody confrontation.

So, I decided to drive out there and find a monument to the battle that was called to my attention by Denny. The instructions on the website he gave me (Battle of Chusto-Talasah December 9, 1861) were slightly vague, but I decided to drop everything and try to find it. There would probably have been a more convenient time for me to do this, but it seemed that it would mean more if I paid my respects on the anniversary date. So, off I went.

I wasn't expecting to find much, and I wasn't disappointed. But, on a lonely road far from the skyscrapers and traffic of the city, I found the monument. It sits in the front yard of a tiny nondescript rundown house amid sad farmland, occasional cattle, working oil wells, and dry creek beds. I stopped to take a photo (in fact, I took three), but apparently the ghosts of those lost in the battle were hell bent on preventing me from getting a good image. All three are blurred. Therefore, the photo here is from the website mentioned above. The inscription reads:

"The Battle of Caving Banks was fought on December 9, 1861 between 1500 Texas and Indian calvarymen under Confederate Col. D.H. Cooper and 2500 loyal Creeks and Cherokees enroute to Kansas with Chief Opothle Yahola. The struggle centered around a log house near the tip of the horseshoe bend in Bird Creek west of this point. Fifteen Confederate dead are buried on this battlefield. Many others lie in unknown graves.
___________
Marked by the Tulsa Historical Society of Central High School and the Tulsa Indian Women's Club. April 15, 1045."

And to make a long story slightly shorter, that's how I found a corner of Tulsa I've never known before. Thanks, Denny.
Posted by Laurel at 2:26 PM

This is very interesting. I have several online friends who do genealogy and/or are interested in the Civil War. I put a link to your blog on Twitter.

Thanks, Miss Dazey! It's a interesting story but too long for the blog. The website I cited has much more information. Thanks for tweeting it out!

Are you sure that "Battle of Caving Banks" isn't a recent Wall Street Journal headline?

Glad it wasn't a total bust. We all learned something and you have less of a chance of running out of things to do tomorrow.

I never knew about that battle in Oklahoma. I know about Big Cabin and Wilsons Creek. But not this one. Thanks for telling us.

Trevor, there's also the Battle of Honey Springs that's re-enacted every couple of years. The battlefield is just outside of Rentiesville.