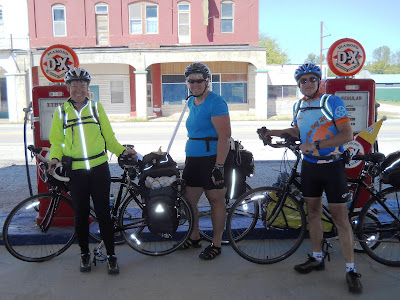 We looked forward to today's visit from these folks, and they finally arrived around 1 p.m. They're from Maryland Hills, MO and Wilmington, DE and they're biking Route 66 in chunks. This year, they've been pedaling from Texas to Miami, OK, so this is their last day on the road after about two weeks. They're pulling two little trailers to haul their tents, sleeping bags, etc. Tattoo Man came to meet them, as did Marly and Phil. After about a half hour, they rode on to Miami. They are an inspiration!

We are very excited about having been included in a list which is being posted on the Internet naming "Oklahoma's Top Attractions Along Route 66" by the Oklahoma Department of Tourism. There were a mere 13 sites on the list, so we are quite thrilled. See the list at: http://tinyurl.com/3guhc63.

Taking the time and effort to ride bicycles the length of Route 66? So, what's my excuse?

You don't need an excuse, Trevor. You have a job, a wife, and kids. Unless you quit your job and took them with you, it wouldn't be such a great idea at this time to take three months to pedal across the country. Right?