What ever happened to lazy summer Sundays? That doesn't happen at Afton Station! I must say that most of our guests are delighted to see us open, since so many Route 66 businesses are closed on Sunday. But why would I close? Afton Station has become a big part of my social life as well as my business life, so why wouldn't I want to be somewhere where I can visit with old friends and meet new ones at the same time?

Sunday mornings are usually slow, but not today. I greeted six guests even before I was officially open! I got an early start , so besides opening 90 minutes early I also had some time to roam around and take a few pictures before arriving at the Station.

I took a ride to a bridge over the Interstate in Vinita where I could get a good overhead shot of what used to be "The World's Largest McDonalds", a title it no longer holds, although I'm quite sure it's still one of the most unique entities in the chain. 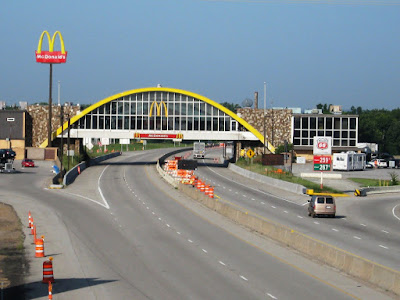 Here is a small gas station a few blocks west of Afton Station which I've been told has been put up for sale. Anyone interested? It's tiny, and recently has just been used for storage. As you can see, it has it's own private lake, just like Afton Station! Hah! 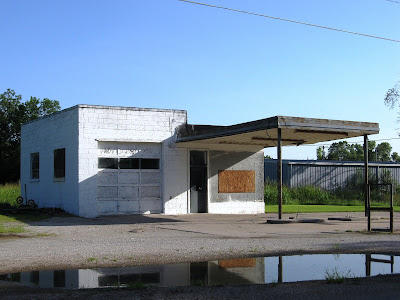 The 23 visitors to the Station today came from an array of states and countries. Prior to officially opening, four travelers from Norfolk, England arrived. I was delighted (but also a bit embarrassed) when they said they'd come to Afton last night after I'd closed, so they drove all the way to Tulsa (80 miles) to spend the night and then drove back to Afton this morning because Gary Turner at Gay Parita had advised them that Afton Station was a "must see". They said they were not disappointed, and I hope they were telling the truth.

Prior to opening, two folks from Claremore on a motorcycle stopped in, too. They were followed by a grandfather and grandson also on a motorcycle all the way from Lakewood, OH, and then folks from Marionville MO, Dewey OK, Grove OK, Ash Grove MO, Vinita OK, St. Louis MO, Brussels Belgium, and finally our friend and veteran Route 66 travelers Jane Dippel and her grandson Max from St. Louis, MO. It's always great to see Jane's smiling face at the door. She and Max are taking their annual Mother Road trip, this time only as far as Amarillo.

Here's another young man, Dylan, who loves to press pennies, but was having quite a struggle with the heavy handle. He insisted on doing it by himself, and was happily successful in the end. All afternoon there was a parade of large racing boats being trucked past the Station. I don't know if they were being delivered straight from the manufacturer or whether there's big boat race happening somewhere on Grand Lake. In any case, it was fun to see all the colorful graphics. This is the only one I was quick enough to photograph, and it was by far the least colorful. 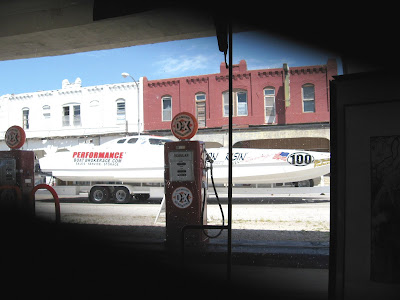 Betty W. stayed with me for the afternoon and she brought me a jar of her home made plum jelly. I just had a taste (on a spoon, right out of the jar) and it's exceptional!