Just about everything that happened at Afton Station today happened in the morning. It was a big day because the long-awaited raising of the vintage DX sign took place at last! David, Marly, Johnny, and Fork Lift Man (whose name I'm afraid I don't know) were involved with the project, with help from PJ, a visitor who just happened to be at the Station during the fun. As for myself, I was both the Official Photographer and the Official Stress Case. Any time the combination of heavy stuff, tall ladders, pulleys, electricity, and people I care about all come together in one place, the Official Stress Case snaps into action. I stood by and watched most of the time. I was relieved for a bit by a visit from two great guys from Ontario, Canada who arrived on motorcycles in the middle of the procedure and managed to divert my attention from the fellows outside trying not to break bones or electrocute themselves.

So, here are some photos of the whole event. 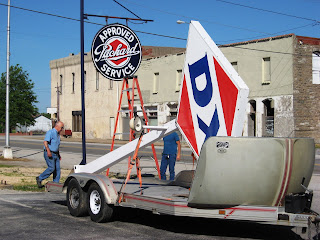 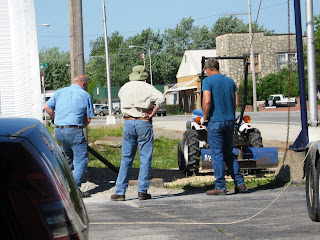 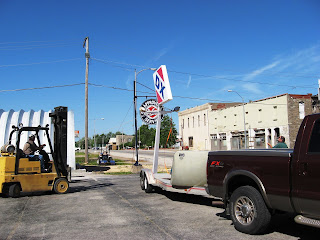 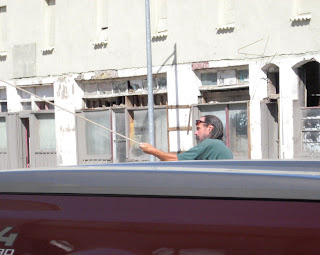 PJ, my visitor who was enlisted to hold one rope. If he hadn't been there, it would have been my job. Thank you, PJ! 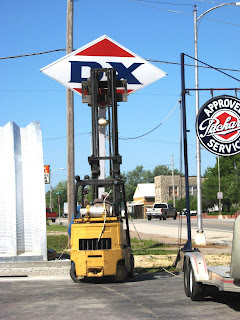 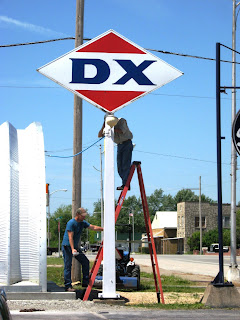 David connects the lights. Marly holds the ladder. They are not internal lights, but instead are old-fashioned spotlights. Can't wait to see it in the dark.
Just as the sign was being hoisted into place, an elderly gentleman from Afton walked up and, with emotion in his voice said, "I never thought I'd see this again. The last time I saw a DX sign at this Station was way back in the mid-60s when this was quite a town". That alone was enough to make it all worthwhile.
_____________ 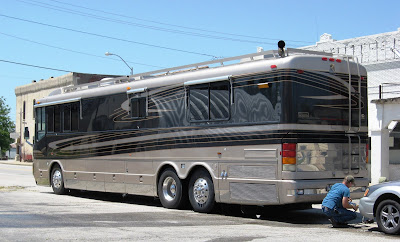 Here's "my" field today. The plants are growing! 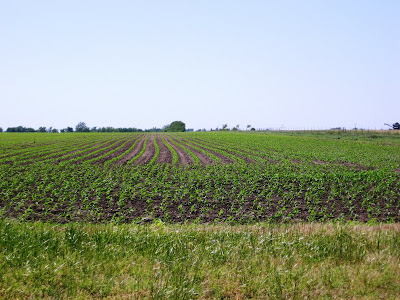 Thinks are looking up ;o)

Oh, and by "another place", I meant somewhere on the property. If we can't find a holder for it, it will go up on the side of the building. It needs a bit of a touch-up first.