An Apple Butter Kind of Day

On a foggy, rainy day, it feels pretty good when someone walks in and gives you three big jars of apple butter. It's also kind of weird, but I'm not complaining! There's never a dull moment at Afton Station on Route 66, you know. 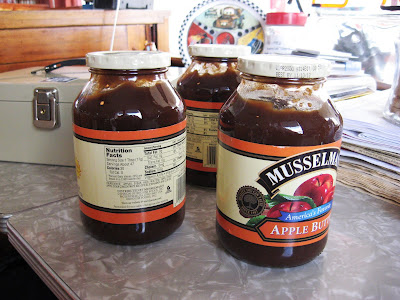 The visitors in question were a delightful couple from Quarryville, PA who are traveling Route 66 in a late model 2-seater Mercedes, so when they told us they were carrying 3 cases of apple butter with them, we couldn't really figure out where on earth they stashed them in the car. The reason they had them? Simple. They love apple butter and never leave home without a large supply of it. The husband slipped out the door mid-conversation and came back moments later with three big jars which he insisted I keep! It's made in the town where they live, and it truly IS marvelous. I gave one jar to Marly, who was there with me, but I was eager to taste it as soon as I got home. Yum! If the gift givers happen to be reading this, thank you so, so much!

There were other visitors too, of course. I opened a bit early this morning, and following me in the door moments later was "Joanie the Cruiser" from Clarksville, IN. She's an occasional visitor when she passes by on her annual solo Route 66 trips. She stayed until about noon and then moved on to Stroud and Tucumcari. There was also a couple from Burbank, CA who are doing some, but not all, of Route 66, and more local folks from Commerce, Grove, Wyandot, and Vinita, OK. I didn't expect big crowds today in view of the weather, although the sun finally broke through the fog and clouds by mid-afternoon.
Tattoo Man stopped by for a while, as did Betty W. Betty's dear friends Reuben and Colleen stopped by and bought some onions. Marly stuck around for most of the day and helped me in many ways, as usual. . . mostly helping me to maintain my sanity. It was a somewhat stressful weekend, but enjoyable nonetheless.
Here's "my" field this morning in the rain and fog. Won't be long before the crop will be so tall that I won't be able to get decent photos of it. 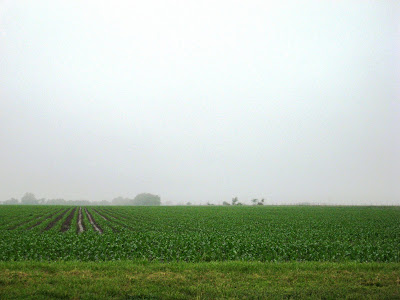 Beth's family makes apple butter and I had a chance to attend a few years ago, it is fun and yummy.