I’m here at Afton and, in an attempt to save a little money, I’m trying to survive without turning on the heat. I know it will warm up later in the day, but right now it’s very cold. I’m keeping warm by doing a little work (very little) like emptying wastebaskets and Windexing the display cases and front door. I’m also getting rid of dead flies, which seem to pile up every night. I have to keep reminding myself that this is, after all, just a gas station, so flies on windowsills are to be expected.

Something happened on the Horse Creek Bridge that’s blocking traffic in all directions, and although it’s only a couple of blocks down from Afton Station, I can’t get close enough to see what it is. Traffic is backed up to the Station and beyond. At this time of day, most of the traffic consists of semis, so I can’t really expect to get any visitors who might decide to wait out the blockade by coming in here. [Added later: A truck jackknifed and hit both sides of the bridge. Nobody hurt, but some damage to the historic 1929 bridge.]

I got my revised dialysis schedule for Thanksgiving week, and I find I need to close the Station on Tues., Thurs., and Saturday of that week. I’m both glad and sad about that. I can use the Tuesday afternoon to get ready for Thanksgiving dinner (which I am cooking, as usual) and Wednesday I’ll need to drive up this way to pick up my turkey from David, who’s frying one for me again. Even so, having a whole week (except for Sunday) of being closed doesn’t turn me on very much.
_________________

My first visitors were a couple from Miami, FL who grew up in Afton. They were more than willing to share some of their memories, but when I went to show them the slide show of historic Afton that I’ve been working on for a couple of weeks, I found it to be all messed up and the photos all missing. I’m sure it’s “operator error”, but I’m a bit freaked about it. I will have to try to restore it later. Another visitor was the project manager for a Conoco Phillips pipeline being laid near here, looking for a place to park his construction trailer for six months. I think we have room, and we would welcome the “rent” we’d get for it. My final visitor was a trucker from Keene, California who was recollecting his first car, a '48 Packard. Since we have one, he was very glad he stopped.

Betty stopped in for a while, but I left a half hour early today because I have a meeting tonight and wanted to come home for a while first. I went down and took a look at the historic Horse Creek Bridge, and it was indeed damaged on both sides by the truck accident this morning. Since the bridge is the only one left on Route 66 in Oklahoma with a pedestrian walkway, I hope they don't find it necessary to raze it. 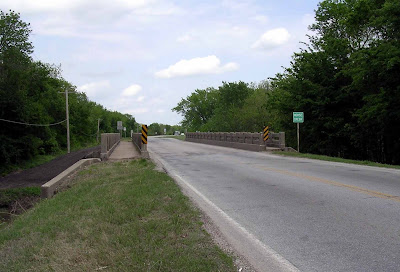 Horse Creek Bridge before accident
Posted by Laurel at 4:28 PM

With a week off, I see several small road trips in your future.

I'm glad nobody was hurt.

I hope the bridge is repaired. We need to preserve our history when possible.