Each day, I attempt to keep a list of the Route 66 travelers who come to visit and where they are from.  I also keep a list of everything I sold that day.   Today, my lists look like chicken scratchings.  The visitors came in so fast and furiously that my writing fingers were tripping over each other to keep up.

There were 67 visitors today, and thank goodness for Ron M. who, as usual, was a huge help.  Robin and Tattoo Man also stopped in for a while, and as  usual, Tattoo's trike drew lots of attentions.

Ok, here's where the folks came from, and after this I'll get a little more specific and show some photos, although there wasn't much time for picture taking today.

Our largest group was a contingent from the Harley Owners Group (12 people) who were scouting the Route for places to stop during their State gathering in October.  There will be about 1000 of them, so we put our best foot forward and I think they're definitely going to recommend the attendees stop at Afton Station. 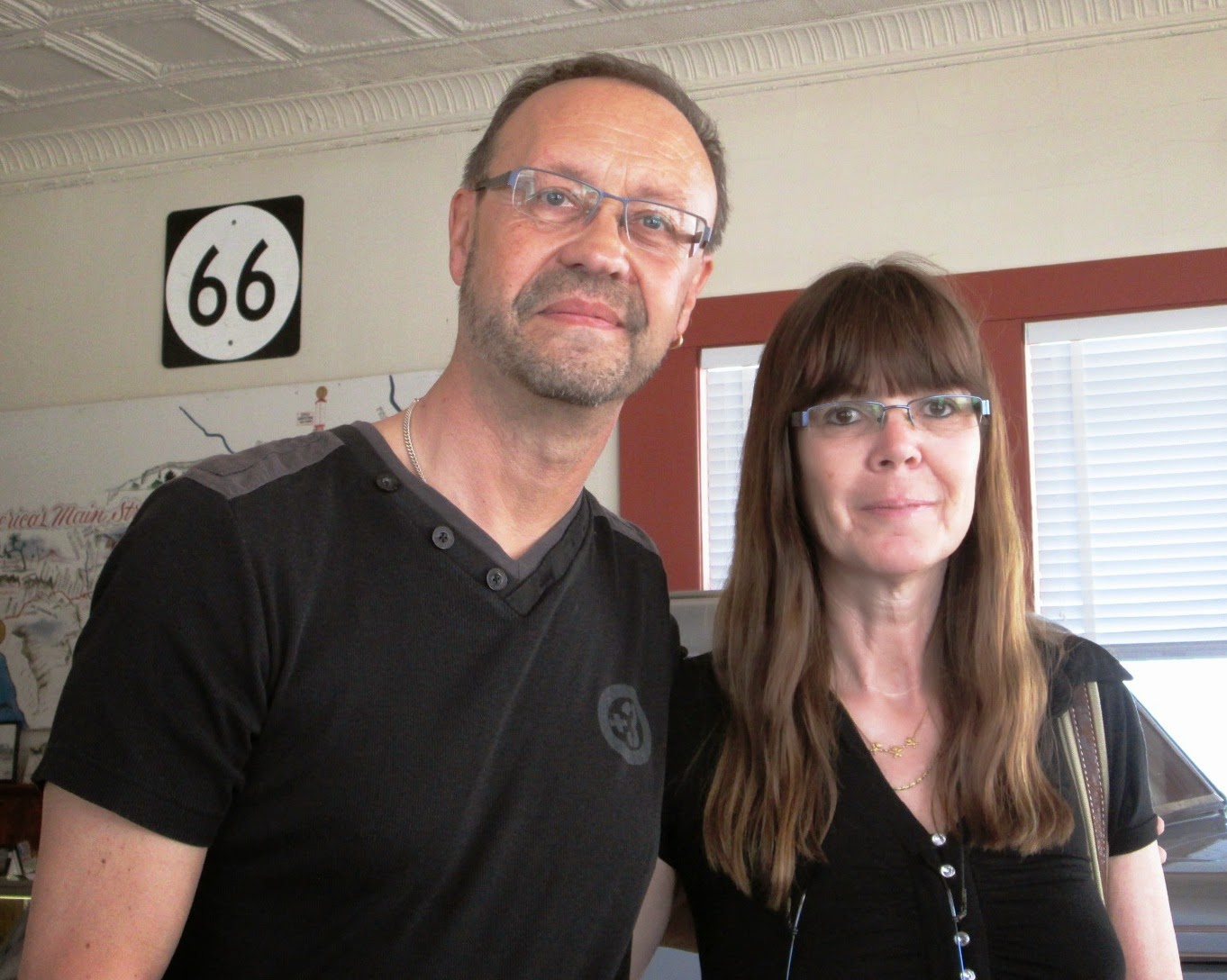 This couple is from  Nierstein, Germany.   He just retired (early) after working for German General Motors.  He started there at age 14 and retired after 44  years.  Amazing!  He owns a '69 Opel GT and a '51 NSU motorcycle. 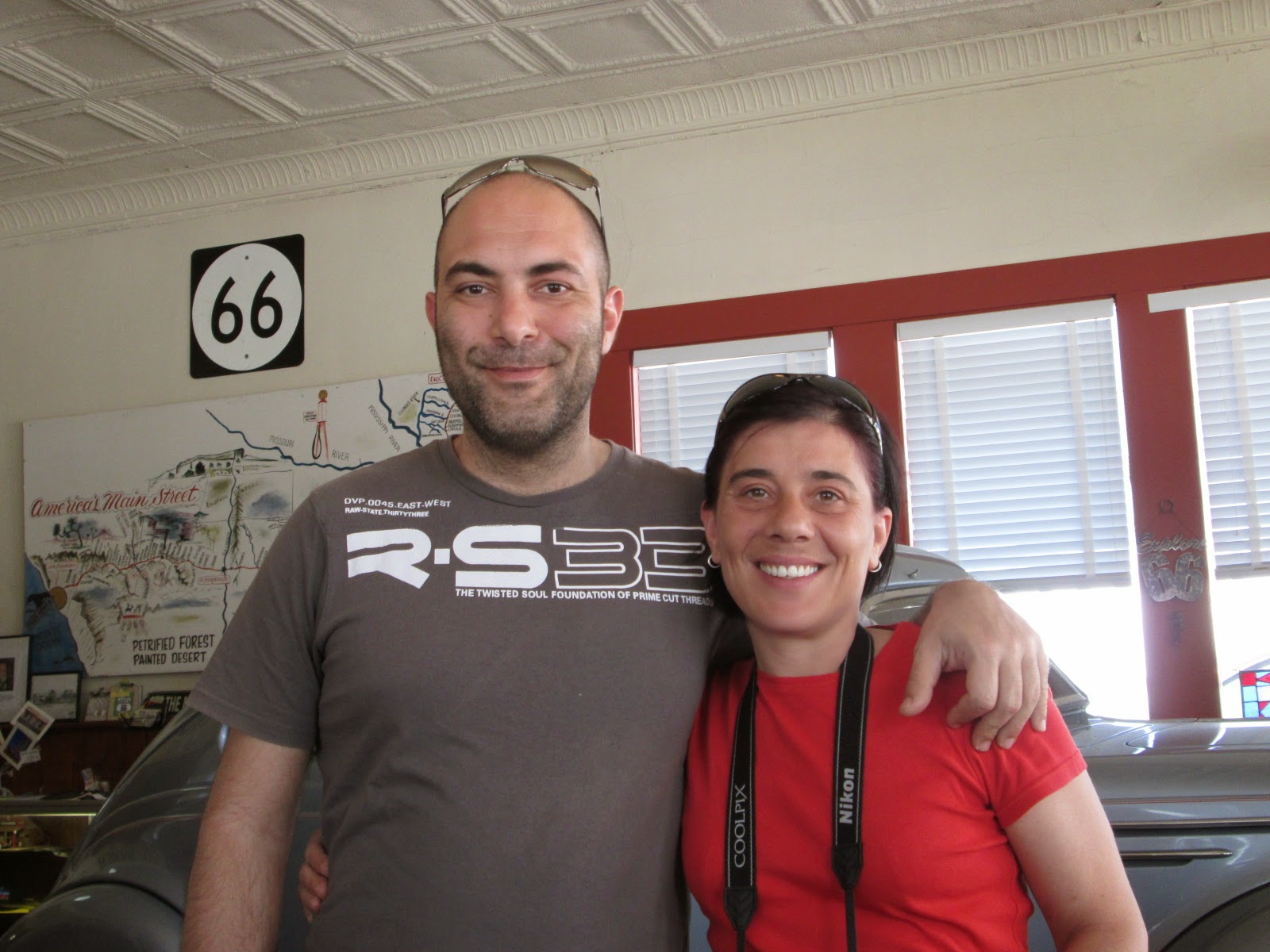 This couple is from Pisa Italy and are enjoying their Route 66 adventure. 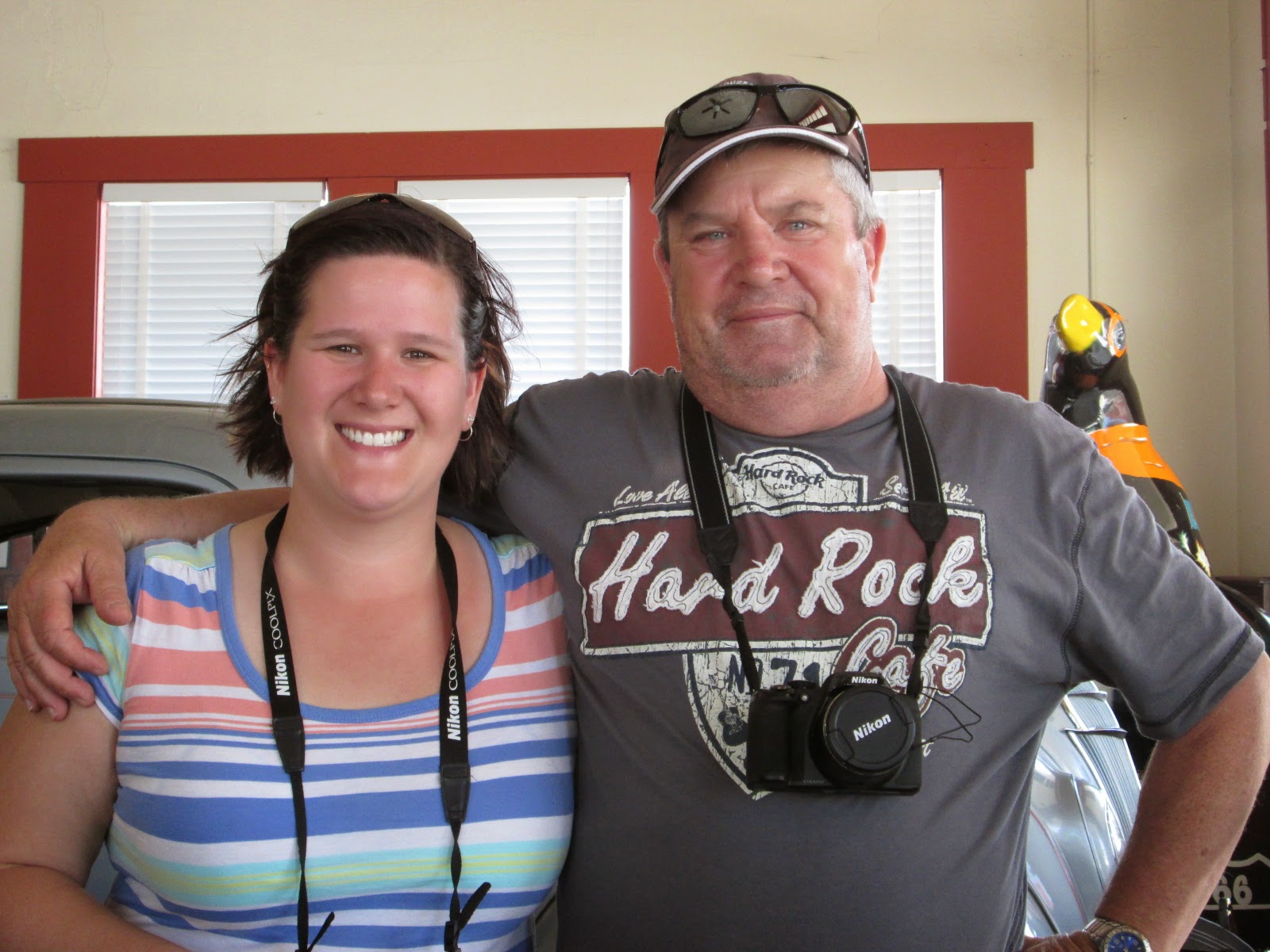 Also from overseas, this father and daughter from Adelaide, Australia.  Mom stayed the car. 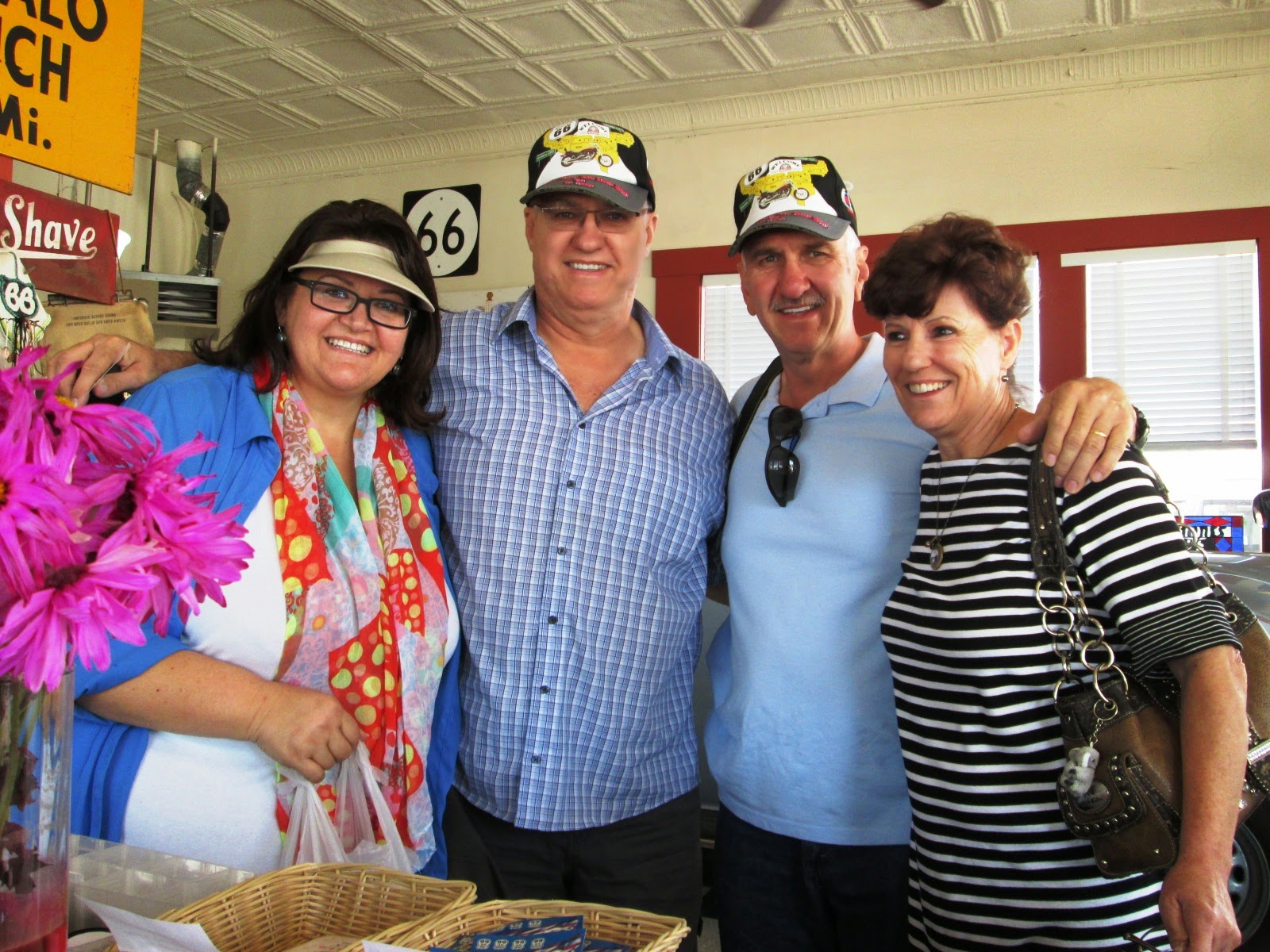 Here are folks from Vancouver, British Columbia via South Africa.   (Oh boy, I hope I'm getting all this labeling right. As I said earlier, I can barely make sense of my notes! And at my age, I certainly can't
rely on my memory!) 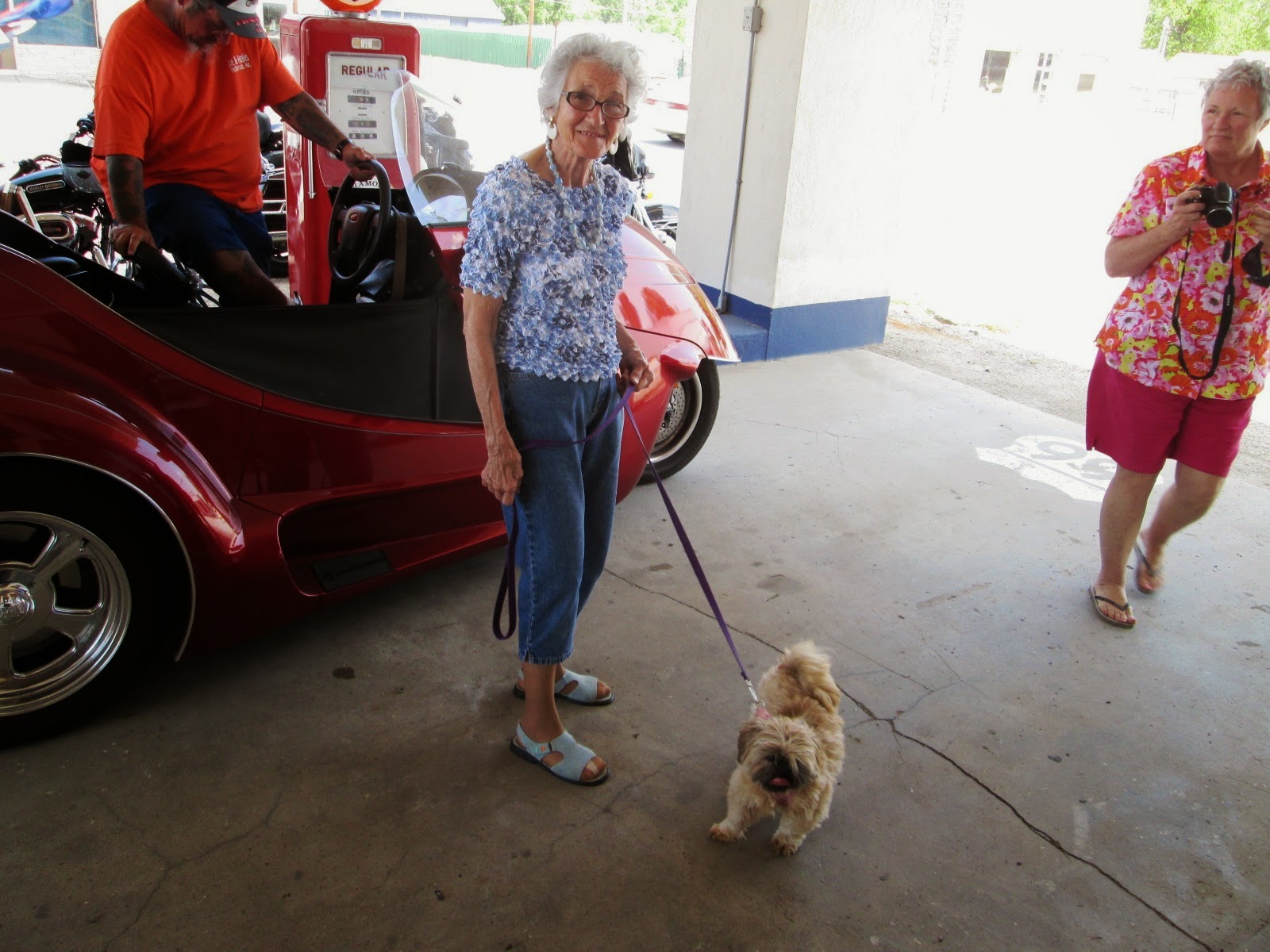 While her daughter from Spavinaw OK looks on, this woman from Purcell, OK walks her cute dog as Tattoo Man, in the background, prepares to leave on his trike.

On top of all this we had several people come to get their Route 66 passport stamped, a family from Grove OK whose 13 year old son is absolutely crazy over antique cars, Jess McEntire (the country singer), friends of Sarah Palin from Wasilla Alaska, and more.    Now, may I please stop and relax for a while?  I'll be back in Afton tomorrow hoping lots of mothers decide they want to celebrate their day by seeing some nice old cars.

Happy Mother's Day to all moms!
Posted by Laurel at 6:03 PM

Great day! Had fun, didn't you?