Another gorgeous sunrise on Route 66.   Oh, how I love the rising of the sun. 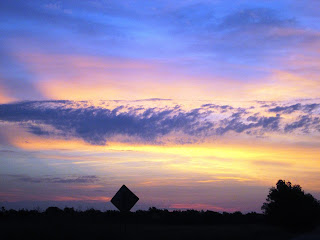 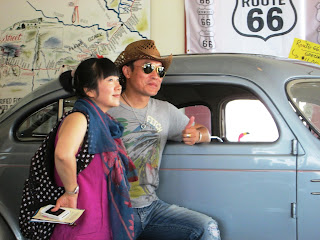 Our Chinese visitors spoke barely a word of English but, judging by their smiles and laughs, they were having a great time.    When she asked "What to see on the sixty-six road?", I didn't know how to express to her that it would take me all day and half the night to tell her what they could see along the road.  I did discern that they started in Chicago and I believe they're going all the way to L.A.  I gave them a map or two. Hope it helped. 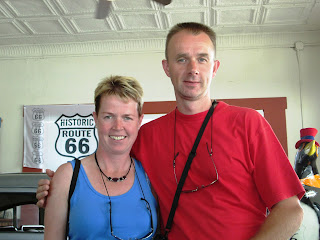 These Dutch folks had a fine command of the English language and have plenty of time to see everything along the way. . . 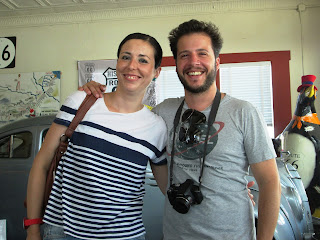 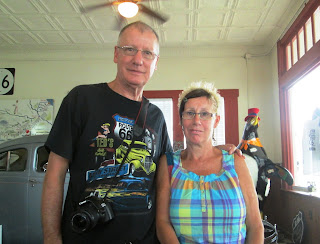 No language problems with this nice couple from the south of England.  They were particularly interested in the vintage cars.  Just as they were leaving, the skies opened up and the rain came down hard.  They had left their car two blocks down the road, so I suggested they stick around until it stopped, but he chose to run for it, thus he ended up quite the wet Englishman!  Enjoyed their visit.

Another visitor from Springfield, MO arrived via motorcycle and left in the rain. I suggested to him, too, that he was welcome to stay at the Station until the rain stopped, but he wanted to leave sooner.  Was it something I said?  :-)

In the morning, Gary Turner called asking me too be on the lookout for a French family of four who left most of their important belongings (laptop, money, passports) at his Gay Parita Station last evening.  They were heading west, so of course I looked for them all day.  I guess they didn't stop at Afton Station, because later I heard that they discovered their misstep in Vinita and were heading back to Gary's.  I'm so pleased that they were reunited with their belongings!

Happy Labor Day tomorrow!  Afton Station will be open, so stop in if you're in the neighborhood.

Too bad Lim wasn't there. she could have interpreted for that Chinese couple. It's good that they are willing to do it anyway.