Slow and steady today.  After battling a driving rain almost all the way to Afton, things settled down and the rain stopped by mid-morning.  We need the rain, so I'm not complaining.  The corn in the fields looks nearly ready for harvesting, and we've already had some excellent corn available in the farmers' markets in Tulsa.  I live for fresh corn on the cob, in case you haven't noticed!

We had a mere 15 visitors today, not including Dean "Crazy Legs" Walker, who has been around enough to go from being a visitor to a "regular".  Once again, he was on his way to a quick draw shooting meet somewhere in western Oklahoma.    Marly and Phil were both around at various times during the day, and Phil helped me open this morning (in the rain) and mopped up the water that made its way into the showrooms.

I bought some new caps to sell at the Station.  Flames on the bills and two Route 66 shields on each.  They're of extremely good quality and will sell for $10.  Unfortunately, they're made in Viet Nam, which is against my policy of selling only Made in America products.   The middle man lives on Route 66 in Missouri, however, so some of the money returns to the Mother Road. 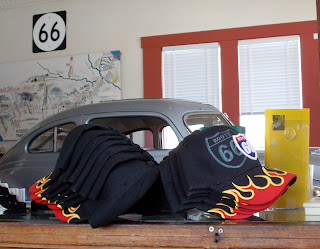 My friend Emily Priddy has just taken a new job as the PR person for the newly restored Campbell Hotel on Route 66 in Tulsa.   She and the General Manager, Trina Salazar, were in the area attending a tourism conference so they stopped in on the way home.  It was nice to see Emily (in business clothes!  Whoa!) and to meet Trina (on left). 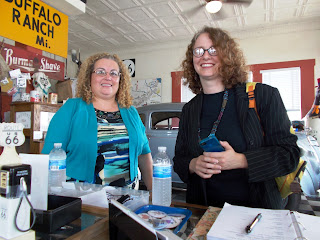 This lovely German family came from near Hanover.   I was incredibly impressed by their pretty young daughter (right) who spoke absolutely perfect, unaccented English.  She told me that speaking perfect English was her goal prior to making this Route 66 trip with her parents. 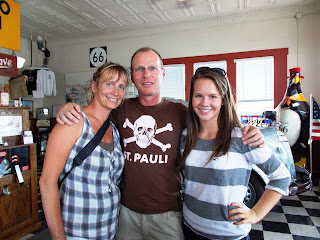 That's about all for today, except to announce that Tripper is ready for the Fourth of July!  Tripper is very patriotic. 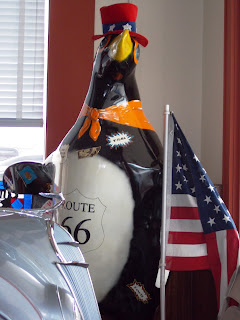 I seem to remember someone promising me that this photo would not make me look dorky. *Eyes Laurel very sternly*

Except for the glasses reflections (my dorkiness, not yours!) I think it's one of the best images of you around. Love the new hairdo, and you're not TOO shockingly dorky when you wear business attire.