It was mild pandemonium from start to finish at Afton Station today. When Ron M. and I arrived, David, Marly, and Kenny were already there and getting started on laying out the foundation for the new showroom in the back yard. A concrete guy was there too, as well as David's two dogs, one being a HUGE lab puppy that appears, from his size at 12 weeks, to be destined end up over 100 lbs. He enjoys chewing on things, including our fly swatter, a bowl we use for snacks, and my purse.

Tattoo Man Jones spent most of the day with us, and our friend Michael O'Keefe from Long Beach, CA stopped by on his way home from this year's travels on Route 66 and a couple of weeks in Eureka Springs, AR. Eighteen other visitors came to call as well. They were from Westpelaar Belgium, Vancouver WA, White Plains MD, Upland CO, Vinita OK, Neillsville WI, Manchester England, Stuttgart Germany, Aberdeen Scotland, and Ketchum and Afton OK. 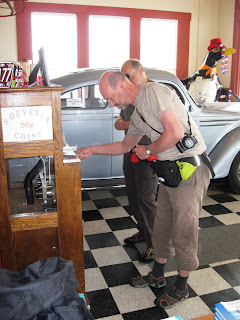 A couple of Belgian guys learning about squashed pennies.

A very special guest today was Jim Conkle from Phelan, CA (who isn't really a guest but instead is a dear and welcome friend.) Jim is the founder of the Route 66 Alliance and the Editor of the Route 66 Pulse. He delivers all of the issues himself, meaning that he drives the whole Route from CA to IL every couple of months pulling a trailer with thousands and thousands of papers. But this time, he had something very exciting on the trailer.... a gift for Afton Station! A BIG gift! We are now honored to own the gigantic old sign from the original Cozy Dog Drive-In in Springfield, IL !!! Here are some pictures of the sign being unloaded. We'll probably put it up on the side of the quonset, but it will take some construction to do so. The sign was accompanied by boxes and boxes of "letters" and "words" to put on the sign to change the message whenever circumstances call for it. We are very honored that Sue Waldmire allowed us to have it! Thanks to Jim for making this happen. 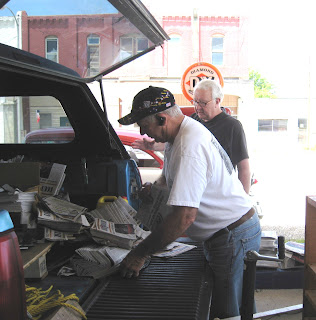 Jim and Ron M. begin to unload the truck. 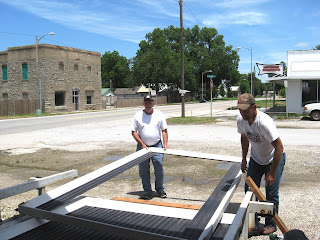 Jim and Marly unload the frame for one side of the sign. 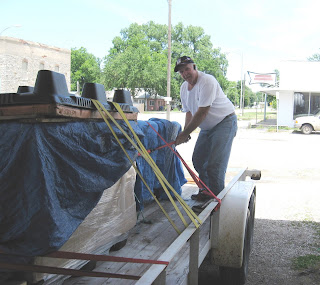 And of course then Jim must repack the trailer.

Today's pandemonium is, I think, a harbinger of the weekend to come. I expect to have very little free time in the next few days, but I'll still try to blog about it whenever possible.