Ok, it's Wednesday, so no Afton Station. Seems like a good time to clean out my picture file. None of these are very good, but they're all on Route 66, so have a look if you wish.

I drove through Red Fork recently. Red Fork is a neighborhood that's strung along Route 66 in West Tulsa. It's the site of the first oil well in Tulsa County, and has continued that heritage by being home to some of the big oil refineries now. It's both industrial and residential. There's not much left to remind one that it was once an alignment of old Route 66, and it isn't easy to take pictures there because there's quite a bit of traffic, so forgive the quality (or non-quality) of the pictures. I didn't feel like getting out of the car, so I just snapped through the windows. 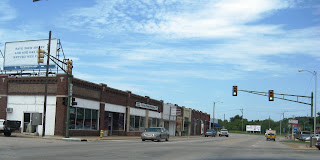 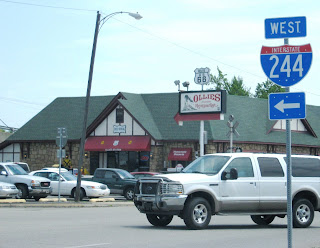 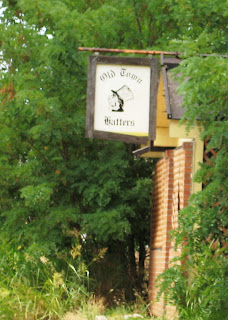 Old Town Hatters. I know nothing about this defunct business but it's intrigued me for years. 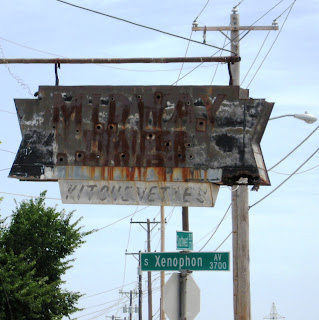 This says "Midway Trailer Court". Nothing left on the site, and barely anything left of the sign.

This is what we call "Dot's Box" in Afton. It's a box of garbage that's been sitting in the street directly across from Afton Station for.... ta da!.... 7 weeks! Yes, we should do a good deed and clean it up, but it's become a symbol for what doesn't happen in Afton (like town maintenance!) and we've decided to see how long it stays there. We call it Dot's Box because it sits in front of a building owned by Dot. 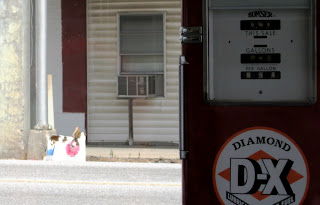 This is an example of an enameled porcelain faced filling station from the '40s or '50s. It's in Vinita. I'm just sorry that there are always so many cars around it. Makes for an unsatisfying picture.

Enough bad pictures for one day? I think so!

I enjoy your pictures. You seem to notice things that I missed when I rode my motorcycle up that way.

I like the pics! The gas station is cool--you don't see a lot of that porcelain tile anymore. I also love the Midway Trailer Court sign (Kitchenettes!), not just because of the old sign, but for the street sign beneath it. Xenophon Avenue. What a cool name...but a strange sound. ;)

You actually make it seem so easy with your presentation but I find this topic to be really something which I think I would never understand. It seems too complicated and extremely broad for me. I’m looking forward to your next post, I will try to get the hang of it!
cheap skip bin hire
skip bin hire yeerongpilly